Rare first edition, published in Zurich while the Anti-Socialist Laws were in force in Germany and illegally distributed there. Engels's motivation for this work was the 1877 book "Ancient Society" by the American anthropologist Lewis H. Morgan, discussing the origins and development of the family. Marx had investigated the same subject and left notes which Engels combined with copious research of his own, blending it with the principal ideas of historical materialism: "thus, the book becomes a fundamental work on the development of society from the viewpoint of historical materialism" (Laffont). For the first time in Marxism, Engels here studies extensively the development of the family and of marriage, as well as the various positions of women in society. "This is the most instructive application of the materialist conception of history to the early forms of human society" (cf. NDB IV, 525).

Browned, with slight staining near beginning and end of the volume. Slight edge defects, mostly repaired, to title page. 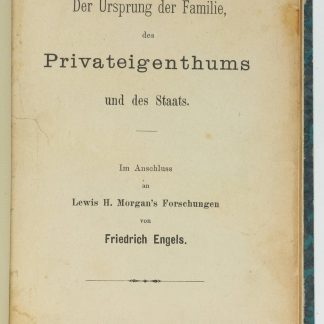