In defence of astrology, against Luther, calling Avicenna as a witness

Extremely rare first and only edition: a defence of astrology written against the criticisms of Martin Luther, quoting Avicenna and other Arabic scholars. "In 1520 Luther had published a comment to the decalogue, including among the violators of the first commandment also magicians, necromancers, and astrologers. Luther's hostility toward astrology was great; moreover, this anti-astronomical polemic on a religious basis was widespread enough as was the traditional, contrary attempt to show [...] the religious legitimacy of astrology. But, coming from a heretic such as Luther, this new attack on astrology could very easily be turned around. Laurent Fries, a physician and astrologer of Colmar, intervened in defense of the science of the stars with a short work (Ein kurtze Schirmred der Kunst Astrologie ... [A Brief Defense of the Art of Astrology], J. Grüninger, Strasbourg, 1520) written in the form of a dialogue between Fries himself and Luther. In this work Fries tried to show that astrology was, from a Christian point of view, perfectly orthodox and not therefore, as Luther had maintained, a pagan science" (cf. C. Ginzburg, Il nicodemismo [Turin, 1970], p. 30). Among the witnesses called by Fries in defense of astrology are not only the gospels and the great thinkers of antiquity, but also several of the great Muslim philosophers and physicians, including Ibn Sina (Avicenna), Muhammad ibn Zakariya al-Razi (Rhazes) and 'Ali ibn al-'Abbas al-Majusi (Haly Abbas).

Occasional insignificant browning; some smudging of printer's ink on second and third folio; contemporary correction and marginal note in ink on fol. A2v. Apparently removed from an old sammelband, numbered "37" at the head of the title by an early hand. Not a single copy is known in the trade; only one is listed via VD16 (in the Bavarian State Library in Munich; a variant imprint of the title is in Göttingen). 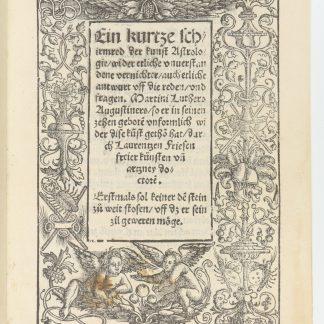