First edition of this important commentary on al-Qabisi's most influential work, "al-Madkhal" (the text of which is included in the Latin translation of Joannes Hispalensis prepared in 1144): an introductory exposition of some of the fundamental principles of genethlialogy, the astrological science of casting nativities, or divination as to the destinies of newborns. The author, known as "Alchabitius" in the Latin tradition, flourished in Aleppo, Syria, in the middle of the 10th century. "Although al-Qabisi's education was primarily in geometry and astronomy, his principal surviving treatise, 'Al-madkhal ila sina'at ahkam al-nujum' ('Introduction into the Art of Astrology') in five sections [...], is on astrology. The book, as the title indicates, is an introductory exposition of some of the fundamental principles of genethlialogy; its present usefulness lies primarily in its quotations from the Sassanian Andarzghar literature and from al-Kindi, the Indians, Ptolemy, Dorotheus of Sidon, Masha'allah, Hermes Trismegistus, and Valens. Although completely lacking in originality, it was highly valued as a textbook" (DSB). "Together with the writings of Abu Ma'shar and Sacrobosco's 'Sphaera mundi', 'al-Madkhal' became Europe's authoritative introduction to astrology between the 13th and the 16th century [...] In 1560 the commentary of Naibod (also known as Nabod or Naiboda) appeared in Cologne. This professor of mathematics had previously published the first book of Euclid's 'Elementa' and his own treatise on arithmetics. For his commentary he relies mainly on Ptolemy, Bonatti and Regiomontanus. Its wide circulation bears evidence to the vivid interest which al-Qabisi's astrology engendered as late as the early 17th century A.D." (cf. Arnzen, p. 96 & 106f.). Naibod (1523-93) taught at the universities of Cologne and Erfurt, adhering to the Ptolemaic principles. His commentary on al-Qabisi was banned by the Catholic church. Naibod is said to have discovered a new method to prognosticate a man's fate, but was unable to avert his own murder in spite of his having presaged it (cf. Jöcher III, 806).

Slightly browned but a good copy. Provenance: 1) Contemporary handwritten ownership "Joannis Roberti Aurelii" on the title page, probably by Jean Robert of Orléans who in 1557 published "Sententiarum juris libri quatuor". 2) Later in the famous collection of the Polish theologian Józef Andrzej Zaluski (1702-74), with his stamp on the title page. With his brother, Zaluski founded the Bibliotheca Zalusciana, the first Polish public library, dispersed in 1795. 3) The book was subsequently acquired by the Warsaw industrialist Jan Henryk Geysmer (1780-1835) (his stamp on the foot of the title). 4) Bookplate of the composer Robert Curt von Gorrissen (1887-1978) on front pastedown. 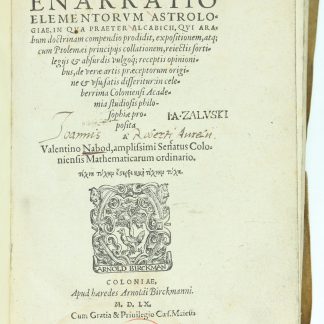