Of lasting value to the history of Arabic literature

4to. 10+1 volumes. With 12 photographic halftone plates of 62 manuscript specimens in vol. X.

A complete set of the scarce original edition, published as volumes 7-9 and 16-22 of the giant general catalogue of the Berlin manuscript collections ("Die Handschriften-Verzeichnisse der Königlichen Bibliothek zu Berlin"). Ahlwardt (1828-1909) was engaged in 1863 as cataloguer of the Arabian manuscripts. Until 1887 he classified, collated, described and excerpted some 12,000 works in ca 6000 volumes, including current accessions. The important collection was based on the precious library bequeathed by Heinrich Friedrich von Diez. It was gradually enlarged by the manuscript treasures purchased from leading German scholars such as Glaser, Landberg, Minutoli and Brugsch, Petermann, Sachau, Sprenger and Wetzstein. Ahlwardt's monumental catalogue is renowned for an unprecedented wealth of details both in physical and textual respect. It formed a pattern for a complete history of Arabic literature - theological, juridical, philosophical, scientific, linguistic, historical and poetical. Ahlwardt expanded on the customary manuscript catalogue entries by providing an exact outline of contents for each work catalogued. "When all ten volumes had been printed in 1899, Ahlwardt had created a work which by virtue of its scope and precision would remain of lasting value to the history of Arabic literature" (cf. Fück, Die Arabischen Studien in Europa, 1955, p. 192).

Bindings a little bumped, dust-soiled and faded in places, some edges foxed. A clean and very good set. 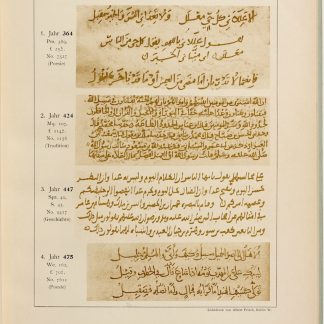