Catalogue of 126 Persian, Arabian, Turkish, Greek, Latin and other manuscripts and printed books

4to. [6], 74 pp. With a woodcut garland of fruits, leaves and nuts on the title-page, 1 woodcut headpiece and 1 woodcut decorated initial. Set in roman, italic, Arabic and Greek type. Later paper wrappers.

Catalogue of the collection of 126 Persian, Arabian, Turkish, Greek, Latin and other books and manuscripts donated to the Library of the University of Uppsala by Johan Gabriel Sparwenfeld (1655-1727). It was compiled by the Swedish scholars Eric Benzelius the younger (1670-1756) and Olaus Celsius the elder (1675-1743). The main series of manuscripts (items I-LXI), described in great detail, includes 41 in Arabic, Persian and Turkish, 8 in Greek (one dating back to the eighth century) and 12 in Latin and modern European languages. These are followed by 42 printed books (LXII-CIII) including 2 in Chinese, several in Arabic, the 1581 Ostrog Bible (the first Bible printed in Old Slavonic) and several other exotic languages, including Irish (set in Anglo-Saxon type). A few more manuscripts (mostly Arabic) are added at the end, numbered I-VI and I-XV, plus an unnumbered geographic manuscript in Chinese (3 volumes). This is the earliest catalogue of the Uppsala University Library's collections. The Arabic, Persian and Turkish titles are set in a large Arabic type cut for the physician and orientalist Peter Kirsten by the Swedish punchcutter Peter von Selow (who served his apprenticeship under Tycho Brahe) and first used at Breslau in 1608. Werner, printer to the university at Uppsala sice 1701, seems to have been the first Swedish printer to use types by Nicolaus Kis, two of his italics and one roman appearing in the present book, though not the roman used for the main text.

After finishing his studies at Uppsala, Sparwenfeld travelled throughout Europe and accompanied the Swedish ambassador to Moscow, where he took an interest in Slavonic languages. On his travels he collected many precious books and manuscripts. In 1687 he returned to Stockholm, where he carried out a study of manuscripts from the ancient Goths. He travelled to Holland, France and Spain, dealing with the Blaeu printing office and mediating in the production of Georgian type cut by Nicolaus Kis for the exiled King of Georgia. In 1691 he travelled to Egypt, Syria and Tunis. Though a Protestant, he presented the manuscript of his Slavonic lexicon to Pope Innocent XII, who granted him access to the Vatican library, a rare honour for a Protestant. He returned to Sweden in 1694. He continued to correspond with scholars throughout Europe even after he retired to his estate in 1712. He wrote and spoke 14 languages.

In very good condition, with only occasional very slight foxing, wholly untrimmed, preserving the deckles and point holes and with the bolts unopened. A remarkable catalogue of an extraordinary library, especially rich in Arabic manuscripts. 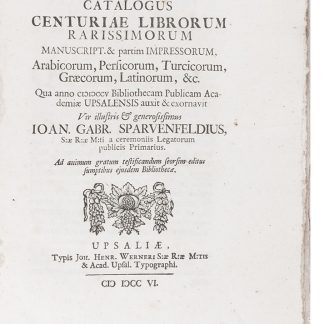