Explanations and charts for comparing the Julian, Gregorian, Jewish and Muslim calendars

The scholar and mathematician Meyer Moses Kornick (also: Kurnik, d. in Hamburg in 1826) was a native of Glogau in Silesia, where he also served as a rabbi. "Kornick, who had corresponded with Rabbis Akiva Eger and Moses Sofer as well as contemporary Christian savants, published synoptic calendar tables that were highly regarded in scholarly circles, both Jewish and non-Jewish [... This] concordance of Julian, Gregorian, Jewish, and Islamic calendars formed the basis of Jahn's 'Tafeln' (Leipzig, 1856). It was highly praised by Isidore Loeb in his 'Tables du Calendrier Juif' (Paris: Durlacher, 1886). Max Simon [...] explained that although Kornick's esteemed tables were sold out at booksellers they still could be found with scholars who rely upon the tables for their research" (E. Carlebach, When Does the Modern Period of the Jewish Calendar Begin?, in: L. Strauss [ed.], Mediating Modernity [2008], pp. 43-54, at p. 47; 53).

Some brownstaining, mainly confined to margins. Binding rubbed and bumped at extremeties, some chipping. Inscribed "Till Blekingska Nationens Bibliothek" with ownership "C. V. Hammar" (and note "+ 1846 30/4") on endpapers. Rare. 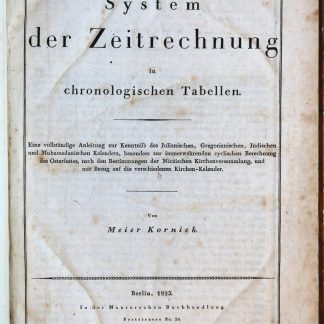