4to. 34 ff., some written on both sides, irregularly counted, containing more than 250 entries (some pasted in). Red morocco with giltstamped borders and cover stampting inspired by the royal arms of Sardinia. Silk endpapers. All edges gilt.

Exceptionally plentiful friendship album owned by Comtesse de La Bédoyère, daughter of the senator Henri de La Rochelambert (1789-1863), wife of Georges Huchet de La Bédoyère (1814-67) and court lady to Empress Eugénie, wife of Napoleon III. Indeed, the first entry in the album belongs to the the emperor himself; this is followed on the same page by Eugénie with a quotation from Sophie d'Arbouville's poem "Je crois": "Je crois au Souvenir, au long regret du cœur, / Regret que l'on bénit comme un dernier bonheur, / Crépuscule d'amour, triste après la lumière / Mais plus brillant encore que le jour de la terre!" This is succeeded by the signature of the couple's only son, the eight-year-old Napoléon Eugène Louis; at the bottom of the page is a four-line German quotation from Schiller, which Napoléon III adds in Biarritz on 8 Oct. 1865. Another entry by Eugénie is on fol. 27r, and there are further entries by her son on fol. 21r and 27r (with a little drawing).

Two other noteworthy entries are on pages 21v and 23v: the first is by Bismarck, who signed in Biarritz on the 19th of October 1865, the very month when the secret negotiations between Prussia and France had begun over possibly coalitions before the Austro-Prussian War of 1866. The second, written at about the same time, is by Leopold, Prince of Hohenzollern and his wife Antonia (fol. 23v). Leopold is considered a pawn of the high politics of his age. In 1870 Bismarck would urge him to accept the Spanish Crown, a move fiercely opposed by Napoléon III. Although Leopold quickly yielded, it was this affair that would ultimately spark the Franco-Prussian War. 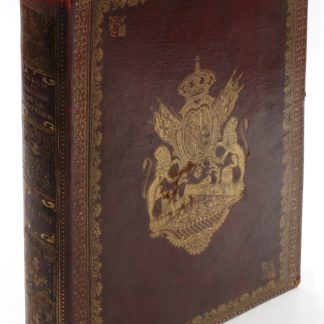