Scarce first French edition of the famous description of Islamic Africa and Arabia, with the illustrations coloured by a contemporary hand; the first collection of voyages printed in France. The book was originally written in Arabic around 1526 by the Berber Andalusi geographer and traveller al-Hasan ibn Muhammad al-Wazzan al-Fasi (ca. 1494-ca. 1554), known in the West as Johannes Leo Africanus, translated into Italian by the author and first published in Venice in 1550. The Arabian Peninsula is depicted nearly complete on the double-page woodcut map and is treated extensively in the first chapter, which contains information on its people, cities, geography, religion, customs, costumes, etc. Illustrations include Arabian camels and veiled women.

Johannes Leo took his Christian name from his sponsor Pope Leo X when he converted to Christianity after his capture in 1520. While still very young he began to travel widely in the Barbary States; in 1513 he appears to have started on his famous Sudan and Sahara journeys (1513-15). In 1516-17 he travelled to Constantinople, probably visiting Egypt on the way; it is more uncertain when he visited Arabias, Armenia and Tartary. His three Egyptian journeys, immediately after the Turkish conquest, all probably fell between 1517 and 1520; on one of these he ascended the Nile from Cairo to Aswan. 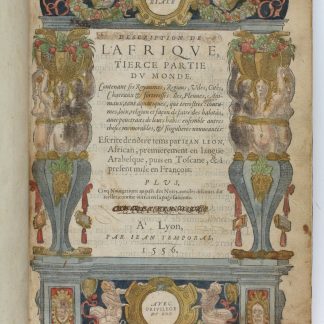