A history of the creation of the Neutral Zone between Saudi Arabia and Kuwait, discussing the historical and legal background of both countries, a comparison with the Trucial Sheikhdoms, the establishment of the Neutral Zone, and the ongoing oil operations in the Zone, with an appendix of legal documents. Based on an unfinished manuscript left by the author upon his death in 1959, the volume was completed posthumously by staff of the Middle East Research and Publishing Center. Dedicated to John Paul Getty.

The Neutral Zone, a 5,770 km² area between Saudi Arabia and Kuwait, had been left undefined when the border was established by in 1922. Partitioning negotiations finally commenced when the rulers of both countries met and decided, in October 1960, that the Neutral Zone should be divided. On 7 July 1965, the two governments signed an agreement, which took effect on 25 July 1966, to partition the Zone adjoining their respective territories. Ratification followed on 18 January 1970.

Quite rare; traced to 19 institutions including 6 on COPAC. 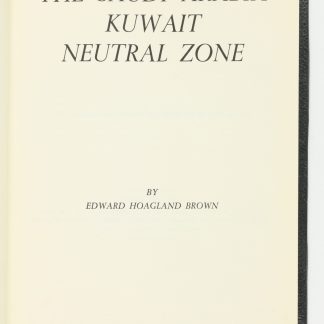