Extremely rare Israeli strategic map of the Arabian Peninsula showing oilfields and associated infrastructure. Printed in black, red and blue, the map demarks the political boundaries of the time along with the areas covered by oil companies' concessions. Pipelines form a web across the northern part of the Arabian Peninsula (shown in uncommon vertical orientation), while oilfields and refineries, large and small, are also marked. The map was most probably created by the IDF in reaction to the Suez Crisis and its associated geopolitical shifts. With the Egyptians operating the Suez Canal, and Britain and France being forced by the USA to abandon their post-imperial plans, Israel now counted in both U.S. and Soviet plans for their control of Middle Eastern politics. Britain was forced to anchor its Middle Eastern influence in Cyprus, Aden and Iraq, while the increased American influence can be seen in the huge swathe of territory assigned to Aramco. We have only been able to trace a single institutional copy of this map in the National library of Israel.

Scale and key in Hebrew inset to top-right, inset explanatory panels in Hebrew and English, compass rose in Saudi Arabia. A couple of small light stains, some uneven creasing and edge tears along creasefolds with a couple of tiny holes at fold joins. Traces of pins from former wall mounting. 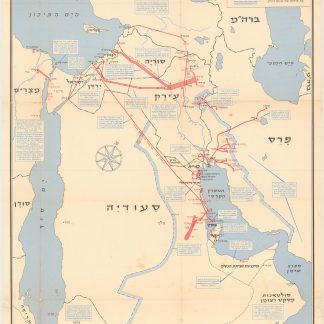