An Anglo engineer in Saudi Arabia

[Saudi Arabia]. Photograph album of a British or American family in Saudi Arabia.

An interesting album of photographs taken by a British or American engineer working on a construction project in Saudi Arabia. Though the project and specific location are not named, it was probably based somewhere in the Eastern Province on the Gulf coast. It was there that Saudi Arabian oil was first discovered and, as a result, the province became the focus of the growing oil industry. Thus is it quite likely the photographer's project was part of the infrastructure supporting the industry's rapid expansion.

A few photos stained at corners. 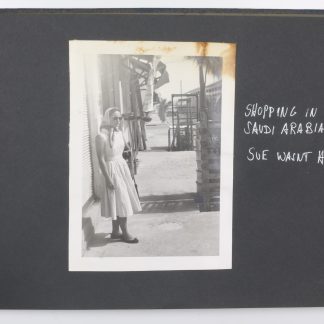