First and only edition. A rare treatise against usury written "for all Christians and particularly for the people of Paris". The author launches a vehement attack on luxury in general and on the taking of interest as one of the greatest of all sins, forbidden by all laws, and against the law of nature. He discusses the prohibitions by Mosaic law, the Prophets, Jesus Christ, the Apostles, canon law and civil law and quotes from the proclamations against usury and usurers issued by the Paris parliament in 1565, by Charles IX in 1567 and by Henry III in 1577. The second part of the book provides more detailed information about the various types of usury, how to approach them, how to treat usurers, etc. As an example of God's hatred of luxury and usury, the author reminds the reader of the dreadful fate of the city of Antwerp, "one of the richest and most prosperous cities in all Christianity", which was sacked in the "Spanish Fury" only a year before the publication of this book, causing the end of Antwerp's prosperity. Godefroy calls himself "Parisien, profez en l'Abbaye S. Denis en France, & docteur en la faculté de Theologie à Paris".

OCLC 492381754. Not in Adams or BM-STC French. Not in Kress, Goldsmiths', Einaudi or Masui. WorldCat locates 4 copies only (Mazarine; Sainte-Genevieve; Lyon; LMU Munich). 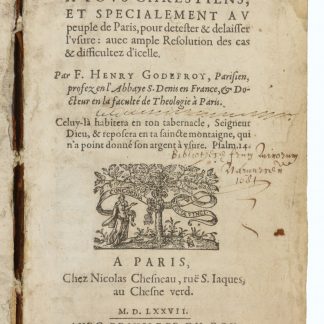