An Austrian soldier from Steyr fighting against Ottoman corsairs

A detailed travelogue of the Austrian soldier Matthias Puel, who joined the papal fleet in 1660 and participated in several naval expeditions against Ottoman corsairs in the Mediterranean. He describes his experiences as a soldier and traveller, starting with a description of his native Steyr in Upper Austria and his journey to Vienna. He discusses the cities, landmarks and fortresses he visited during his travels, as well as the fierce battles with the Ottomans and the terrible conditions aboard the galleys (cf. ADB XXVI, 692). The plates show fine and uncommon views of Steyr, Vienna, Rome, Naples, and Mt. Vesuvius erupting. "Dedicated to Maximilian Luckhner, the mayor of Steyr [...] Chapters 3-8 treat Hungary, giving a detailed account of Raab, Komorn, Neuhäusel, Tyrnau, and Pressburg" (cf. Apponyi).

Lightly browned; title-page duststained in the margin. Frontispiece trimmed rather closely with minimal loss to image. Wrappers worn; lower corner of front wrapper torn away, rebacked and retouched by a later owner. From the library of the Viennese collector Werner Habel (1939-2015) with his handwritten and stamped ownership, dated 1976, to inside of upper cover. Rare. 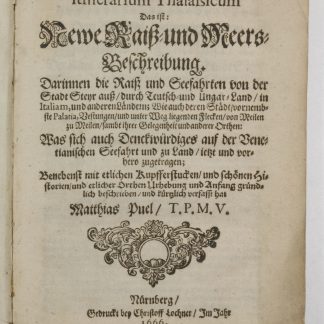