A fine collection of maps and views of Hungary which Bodenehr issued after the 1718 Treaty of Passarowitz, in which the Ottomans had to surrender large areas to Habsburg Empire, which now reached its greatest territorial expanse in history. Among the engravings are many fortresses and cities, such as Vienna, Pressburg, Sziget, Munkacs, Tokay, Nagy-Várad, Gyula, Temeswar, Kaschau, Buda, Belgrade, Székesfehérvár, Orsva, and Constantinople. The present issue must have appeared in or after 1737, as the view of the fortress of Užice mentions the handover that took place on 2 October of that year.

Light foxing, browning and waterstaining. Binding slightly scuffed and rubbed; front flyleaf creased. Contemporary ownership of Joseph Wanizek to title-page. Latterly in the library of the Viennese collector Werner Habel (1939-2015) with his handwritten and stamped ownership, dated 1978, to the pastedown. 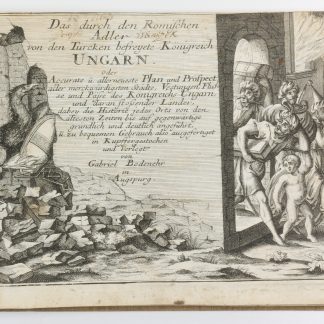