The final volume only of the extensive four-volume work by the German mathematician and architectural theorist Penther (1693-1749), considered "the most substantial treatise of civil architecture by a German writer" (British Arch. Libr.). It covers, inter alia, "residential houses, orders of columns, palaces, triumphal arches, military barracks, prisons [and] theatres" (cf. Ornamentstichslg. Berlin). The plates by the engraver and publisher Pfeffel (1674-1748) show floor and elevation plans as well as details. Volume IV includes the palaces of Versailles, Weissenstein and Ludwigsburg, as well as the city palace in Hannover, the Celle gaol and the opera houses of Berlin and Hannover. Dedicated to Friedrich Ludwig, Prince of Wales, with his engraved portrait shown in profile by Georg Daniel Heumann (1691-1759). A 1862 ownership by Anton Kiemeney [?] to the verso of the blank leaf following plate LXIX. Wants the engraved title and the letterpress title-page, as well as 8 plates, namely IX, XXI, XXVI, LVI, LXI, LXXIX, LXXXV and LXXXVI. Plates LXXVI f. are bound between LXXXI f., while plate LXXVIII comes after LXXXIV.

Lower cover slightly waterstained. A hole in the duststained dedication page, rebacked with paper (no loss of text). A tear in the lower third of pp. 47f. The top right-hand corner of plate LI torn off, some loss of image. Plates XLVI and LIV narrowly trimmed, slight loss of text and image. Folds of several plates reinforced with strips of paper. From the library of the Viennese collector Werner Habel, with his signed and stamped ownership, dated 1982, to the flyleaf. 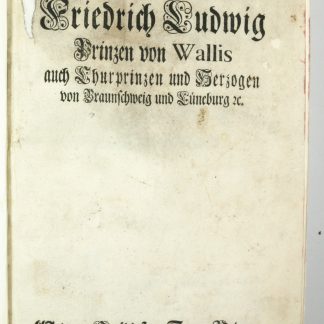