Burgess, James / Cousens, Henry. The Architectural Antiquities of Northern Gujarat, More Especially of the Districts Included in the Baroda State.

Colour map and 111 plates and plans, some collotype, one double-page, 4 pp. advertisements at end. Original cloth.

First and only edition of this study of mainly Hindu and Jaina architecture in the state of Gujarat on the western coast of India, superbly illustrated with collotypes. Published as volume IX of the Archaeological Survey of Western India. 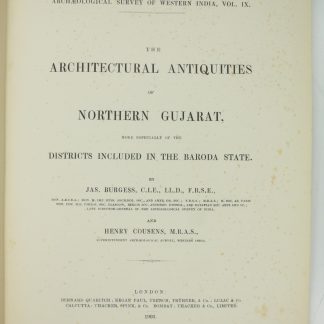 You're viewing: Burgess, James / Cousens, Henry. The Architectural Antiquities of Northern Gujarat, More Especially of the …London, 1903. € 650.00
Add to cart