One of the earliest editions of the Cosmographia

An early edition of Münster’s monumental work. The Cosmographia by Sebastian Münster (1488-1552), the German cartographer and cosmographer, was one of the most successful and popular books of the 16th century. The most highly valued of all cosmographies, it passed through 24 editions within 100 years and was of principal importance for reviving the interest in geography in 16th century Europe. In spite of its numerous maps, Münster's Cosmography is largely a work of historical geography and history, and it was thus that it soon became the most popular work of its kind throughout Europe - not only in Germany, but also in France (where it saw several editions), Italy, and Bohemia. "The Latin edition, more scientific in many respects, was intended for the scholars in all of Europe" (cf. Burmeister, p. 14).

In good condition, with some frequent but slight waterstaining. A few near-contemporary underlinings and annotations, some in red ink. Binding rubbed, chafed and bumped. Provenance: handwritten ownership of Carl Isaak Rothovius, dated 1649 (possibly related to Isaacus Rothovius [1572-1652], the bishop of Turku, who oversaw the first complete translation of the Bible into Finnish). Late 18th century engraved armorial bookplate of the naturalist and Swedish civil servant Mathias Benzelstierna (1713-91), who studied with Carl Linné and became a member of the Royal Swedish Academy of Sciences in 1786. 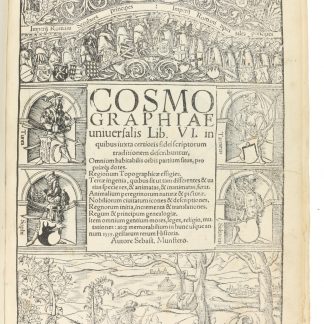