How to stir hearts and minds to mutiny and rage

An uncommon poem on the art of rhetoric, written in 1214 numbered lines in hexametrical verse. Divided into eight chapters (or "elegies"), it discusses the basic question of "who shall become an orator" as well as the more practical ones of "how to excite and to lessen love" and "the causes of love, or on those who love and are loved". Other chapters seem to be aimed fairly at the political speaker: "how to lessen affection and foster loathing" and "how to excite and quell anger", with separate paragraphs on arousing "fear" and "pity". Although the verses are numbered, no source could be traced and the poem seems entirely original. The manuscript appears to be written by a single hand, though not in an uninterrupted process, and various changes in the script's ductus can be identified.

Trimmed slightly before binding, the knife having touched some line numbers. From the collection of the French theologian Abbé Abraham Girard (1635-93), whose library was dispersed at auction in 2018. A native of Lyon, Girard would later rise to the office of head abbot at the Cistercian abbey of Chalivoy near Bourges. His dissertation "Triplex philosophia: aristotelica et seria propugnata, nova et amoena problematice agitata, epicurea et ludicra confutata", which he defended at the Jesuit college of Chalon-sur-Saône, was published in 1652 when he was only 17 years of age. The manuscript appears to be a keepsake from the theologian's student days, when Girard would have studied rhetoric as part of the basic "trivium" division of a classical education. 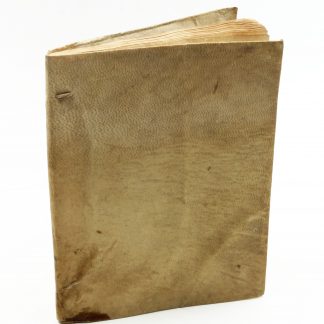