A fascinating manual of rhetoric, with chapters on "how to speak well" ("eloquence consists of three things: invention, disposition, and elocution"); "sources of metaphors"; "the four sections of a speech (introduction, narration, confirmation, epilogue)"; enunciation and voice; the best posture and gestures for a speaker; how to dispose one's hands, arms, and feet; relevant literature by Greek, Latin, and other authors, etc.: notes such as would have been taken in the early modern rhetoric course, which formed part of the basic "trivium" division of a classical education.

Trimmed before binding, affecting some glossal notes. The leaf numbers were obviously added quire by quire, before sewing, which explains some skipped leaf numbers (quires b and d start with 13 and 37 in error, assuming the previous quires to have ended in 12 and 36, respectively), though leaves 18 and 19 appear to be missing.

From the collection of the French theologian Abbé Abraham Girard (1635-93), whose library was dispersed by auction in 2018. A native of Lyon, Girard would later rise to the office of head abbot at the Cistercian abbey of Chalivoy near Bourges. His dissertation "Triplex philosophia: aristotelica et seria propugnata, nova et amoena problematice agitata, epicurea et ludicra confutata", which he defended at the Jesuit college of Chalon-sur-Saône, was published in 1652 when he was only 17 years of age. The present manuscript is composed in a single, but somewhat uneven hand: very closely written near the beginning in an almost cramped style that gives way to a much more generous, striding disposition toward the later pages. Clearly, the writer is not yet fully at ease with the larger, decorative script of the chapter headings, and even less so with the odd Greek interspersion. The manuscript would appear to be a keepsake from the theologian's student days, and as the writing is consistent with that of a budding 17th century scholar in his early or middle teens, it tempting to speculate that these are Girard's own lecture notes. 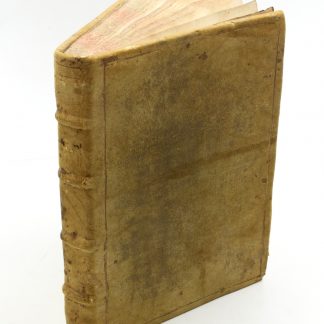