Folio (321 x 200 mm). 3½ pp. on 4 ff. Autograph emendations and cancellations in black ink, editorial annotations in pencil and pink ink in another hand (each of the first three leaves in two pieces and repaired with thick tape).

An intriguing autograph manuscript by Kipling for a satirical short story. Written to be published in the Pall Mall Gazette, "Things As They Are" never appeared there and is not published in any of the collected editions of Kipling's work. Kipling recounts the details of a conversation between "That very terrible deity The God of things as They are" and the British public, imagined here as a teething kitten, on the failure of most artists to truly grasp the beauty of the world around them.

The manuscript was written by Kipling for the Pall Mall Gazette under the condition that his name not be attached to it; the editor, Harry Cust, refused to grant this anonymity, so Kipling declined to have it published. Rudyard Kipling was just one of the literary luminaries enticed to join the ranks of contributors to William Waldorf Astor's Gazette under the editorship of Harry Cust, who transformed the publication into one of the best respected evening journals of the time after his appointment in 1892; alongside Kipling, it featured work from H. G. Wells, Algernon Swinburne, Jack London, and Joseph Conrad. The manuscript was probably written between 1892 and 1896: Kipling writes on the same theme in an article published by The Times on 20 August 1892 entitled "Half-a-Dozen Pictures", and by 1896 Cust had ceased to edit the Gazette. 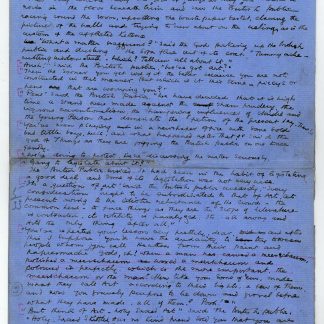