Field guide for officers during the Mesopotamian campaign (1914-1918), with a folding map

First edition of a field guide to Mesopotamia (Iraq), published on behalf of the General Staff in India for the use of officers serving in the Mesopotamian campaign during the First World War, stating on the binding and title-page "for official use only". The guide is divided into eight chapters, dealing with Iraq's history, geography, population, resources, military strength, maritime power, administration and communication respectively. The fifth and sixth chapter also contain valuable information on the Turkish military and maritime strength. Added to the present guide is many newly acquired information not present in the 1915 guide. For example, the "list of routes" in the present guide contains 36 routes from one city to another, compared to 14 routes in the 1915 guide. The routes are shown on the folding map. With the owner's inscription of H. W. Leatham, Lieutenant in the British Royal Army Medical Corps, on the first flyleaf. A few small spots or stains. Binding only very slightly rubbed. Overall in very good condition. 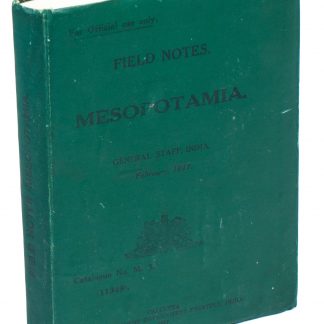