Unpublished obstetrics manual, handwritten and fully illustrated by a German physician of the 1740s. The meticulous calligraphy of the headlines, the justified margins and precise paragraph indentations imitate a book printed in a classical Roman typeface, while the text is written in an easily legible, educated and appealingly regular round Latin hand.

The book is arranged in two separate sections, or "treatises": the first, longer one includes all of the illustrations and is more overtly didactic, following a question-answer pattern, while the second one (entitled "De regimine gravidarum, puerperarum, nec non infantum, recens natorum; item, de morbis et affectibus illorum"), provides a more scholarly discussion of specific ailments and treatments of the mother and baby, including medical prescriptions. The various chapters are concerned with signs of pregnancy, how to turn breech babies, caesarean sections, stillbirth, teratology, but also morning sickness, piles, sciatica, and lactation; the fine illustrations include cross-sections of the womb showing the fetus in various positions, the placenta, and the female genital organs as well as a grown-up hermaphrodite displaying ambiguous genitalia, conjoined twins and other freaks of nature.

Franz Adam Wolfgang von Winter was born in Dingolfing, Southern Bavaria, likely some time before 1720. Already equipped with a degree in philosophy, he apparently practised as a physician at Landsberg, some 20 miles distant, before deciding to take the degree of Medical Doctor at the University of Altdorf near Nuremberg. Without previously having studied there, he matriculated on 10 December 1744 as a doctoral candidate and passed his viva five days later (cf. Die Matrikel der Universität Altdorf [Würzburg 1912], p. 582, no. 17465). His inaugural dissertation "De Cautione in Observationibus Physico-Medicis Adhibenda", an investigation of the caution that must apply in medical observations, was printed that same year by J. G. Meyer in Altdorf, with a congratulatory poem by professor Johann Jacob Kirsten. The examination would appear to have been little more than a formality; at least it does not seem to have overly preoccupied the medical student who almost simultaneously found the time to prepare the present manuscript: a long, lovingly illustrated manual abounding with a sort of practical detail quite absent from the same author's very generally worded 17-page dissertation. In the manuscript, Winter calls himself "Phil. & Med. Doct. Phys. t. t. & Practic. in Landsperg, Anno MDCCXLIV", which would date at least the completion of this text within the last two weeks of 1744 following his graduation from Altdorf. Winter's further career must remain the subject of further research: he is not recorded in the biographical dictionaries of noteworthy physicians such as Hirsch & Hübotter and may have died before the middle of the century. 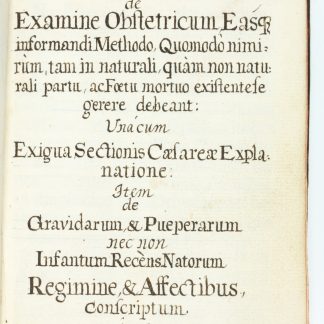