Original logs and journals of South American voyages 1857-1860, with 8 sea charts (with routes) and about 23 views (many in colour)

[In the Atlantic, along the European, African and especially the South American coasts, 1857-1860].

Small folio (320 x 205 mm). With: (2) The same. Log of H.M.S. Siren. 16 guns[,] commanded from May 1st to May 8th 1858 by Captain J.H. Selwyn, from May 9th 1858 to [27th July 1858] by Com[ande]r G.M. Balfour, kept by T. A. Sneyd Kynnersley naval cadet & midshipman, acting mate & acting lieut[enan]t commencing May 1st 1858, ending April 11th 1860. (3) The same. Journal of T. A. Sneyd Kynnersley acting mate H.M.S. Siren, 16 [guns], commencing July 28 1858, ending [11 April 1860]. (215) pp. (including 5 blanks); (117 blank pp.). Three English manuscript ships' logs written in a single album during the voyages, in black ink on laid paper with a blue cast, with 3 hand-lettered title-pages, the 3rd with the title in a drawn and coloured loop of rope and all three with drop-shadowed sans-serif capitals, the first two with the drop-shadow in colour, 2 sea charts showing the routes and 8 colour views (in watercolour, coloured pencil and sepia and black ink, mostly ships on the South American coast, but also camps) are drawn on 9 separate leaves (7 mounted in the album and 2 loosely inserted, probably all by Sneyd-Kynnersley and 4 signed by him, with one sea chart on the back of a loosely inserted view), and 6 sea charts showing the routes and about 15 views drawn directly on the album leaves, mostly in black ink, but including a colour plan of one of the ships.Contemporary black half sheepskin, sewn on 3 green vellum tapes, with a hollow back, shell-marbled sides (small blue shell spots with red veins), the smooth spine gold-tooled with 5 horizontal rolls and the title (apparently made for Sneyd-Kynnersley when he acquired it): "Log / H.M.S. Cumberland / 1857" (with a blank space left for the year of completion).

A manuscript log book and journal of voyages to, from and along the coast of South America in the British navy ships Cumberland and Siren, all kept in a single album by the midshipman Thomas Alfred Sneyd Kynnersley (1839-74) in the years 1857 to 1860. The first voyage sailed from Cornwall to Rio de Janeiro, while others sailed along the South American coast, including the Falkland Islands (Islas Malvinas), Montevideo, Rio de Janeiro, Buenos Aires, Bahia, Pernambuco, Port and Cape Frio and Bahia de São Marcos. The album includes views from nearly all of these sites, probably all by Sneyd Kynnersly and some signed by him, plus a full-page survey (with coastal profiles) of Atol das Rocas, a volcanic and coral atoll off the coast of Brazil, providing a detailed record of its state 160 years ago. The drawings are excellent, especially when one considers that Sneyd Kynnersley set off on these voyages as a 17-year-old junior officer.

Sneyd Kynnersley was born in Uttoxeter in Staffordshire. He was promoted to lieutenant in 1860 but had to take leave soon after due to illness and settled in New Zealand, where he remained to his death.

All the album leaves, including the paste-downs and three leaves inserted in the regular quires, are made of laid paper with a bluish cast, watermarked: E Towgood / 1856 = Brittania in a crowned triple oval. Sneyd Kynnersley no doubt acquired the album for the purpose of keeping his logs before he set off in 1857. The logs occupy the first 209 pages, with some additional notes on the following 3 rectos. The rest is blank and about 15 leaves at the end have been torn out, no doubt partly to use for other matters, though 3 may have been used to make the 3 inserted leaves.

The bluish paper has some white spots throughout and 1 leaf is tattered at the fore-edge, but the text and drawings are in very good condition. The bookblock has separated from the binding at the inside front hinge and shows minor damage at the head and foot of the spine and along the board edges, and a few small, minor scuffs on the boards, but has survived its voyages in surprisingly good condition. A detailed and well-illustrated set of ships' logs, mostly concerning South America. 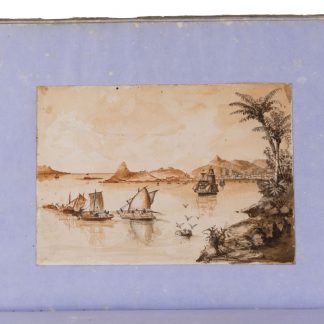 You're viewing: Sneyd Kynnersley, Thomas Alfred. Log of H.M.S. Cumberland [commanded by] Captain J. B. Dickson bearing the …In the Atlantic, along the European, African and especially the South American coasts, 1857-1860. € 22,000.00
Add to cart