First edition of a French translation from the Greek by the French physician Jean Canappe, of two chapters (5 and 9) from Galen's pharmaceutical work later translated into Latin as the De simplicium medicamentorum facultatibus. Canappe would publish a full translation a few years later as Le livre des simples (1545).

"There is no name more illustrious in the whole history of medicine than that of Galen [...] Written in Greek, this Galenic treasure reached the Latin Western World only through Arabic translations" (Hagelin).

With the bookplate of Etienne Récamier (1833-98), Bibliothèque Lyonnaise 1858-93, some partly removed owner's inscriptions on title-page and a few other inscriptions throughout. Some occasional smudges and stains, but otherwise in good condition. 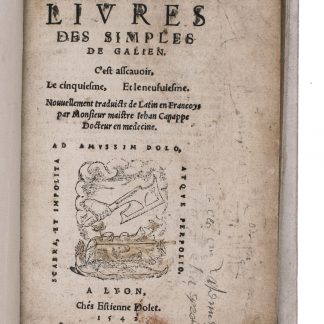