Classic work on distillation, with dozens of woodcuts

Third edition in the original Latin, of the first part of Conrad Gesner's very popular book of secrets. It primarily concerns distillation and its use in making medicines, with most of the woodcuts illustrating furnaces, glassware and other equipment for distilling. It discusses the various kinds of distillation, the equipment and techniques, aqueous solutions, the making of medicines from a wide variety of plants, animals and minerals (including metal salts), extracting oils, etc.

"The work begins with a short historical introduction which says that the Greeks and Romans could not yet distil and claims that the art was invented by the Barbarians, Carthaginians and Arabs shortly after the famous Hellenistic physicians. He gives a few short notes on Arabian scientists like Mesue, Avicenna and Bulcasis, describing their methods of making rose-oil" (Forbes).

Conrad Gesner (1516-65), a Zurich scholar of remarkable breadth who wrote on bibliography, botany, zoology, medicine and pharmacology, published the first volume of his De remediis secretis in 1552 under the pseudonym Euonymus Philiatrus. It quickly went through many editions and was translated into French, German, Italian and English by 1559. A second part appeared posthumously, edited by Gesner's student Caspar Wolf (1532-1601) and Froschauer, who printed its first edition.

Binding soiled and a few stains and smudges throughout; a good copy. 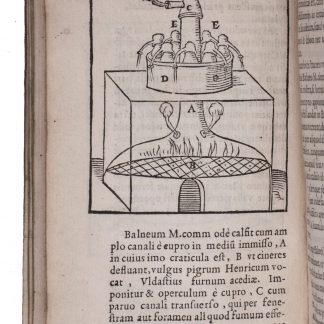