4to. (8), "225" [= 215], (1 blank); "80" [= 72] pp. Including: Nicander of Colophon. Alexipharmaca. In Nicander Theriaca scholia auctoris incerti, et vetusta et utilia. In eiusdem Alexipharmaca diversorum auctorum scholia. 3 parts in 1 volume. Each part with its own title-page, with a woodcut caduceus device on all three. Set in roman and Greek types. 17th-century(?) richly gold-tooled red morocco, gilt edges; subtly rebacked, with the original backstrip laid down.

Bilingual edition (Greek & Latin) of two medical hexametric poems by the Hellenistic poet and physician Nicander of Colophon (fl. second century BC), followed by a part with ancient scholia in Greek. The two poems are followed by comments by its translator, the Parisian pharmacist Jean de Gorris (1505-1577). They were first published separately in 1549 and 1556 and here for the first time published together. Nicander wrote at least 20 works, but "only his Theriaca (958 hexameters on poisonous creatures and on antidotes for their bites and stings) and Alexipharmaca (630 hexameters on antidotes to poisons) are extant".

"Nicander's influence on later Greek and Latin literature was considerable. Not only did Virgil, Ovid, and Antoninus Liberalis draw on his works, but Lucan, Pliny the Elder, Erotian, Aelian, and Athenaeus of Naucratis also benefited from direct or indirect familiarity with Nicander. In the 1st century BC the enormously learned scholar Didymus ("Chalcenterus") appears to have made extensive use of Nicander's lexicographic contributions. Although Dioscorides only twice cites Nicander's views in his Materia Medica, Galen in his pharmacological works quotes a number of verse passages from Nicander. Papyrus fragments from the 1st to 3rd centuries AD further confirm Nicander's popularity in the Roman empire" (Von Staden).

With the bookplate of the British politician John Thynne, Baron Carteret of Hawnes, dated 1841. Washed, with some faint early manuscript notes. Durling notes that, like in our copy, a general title-page is lacking in their copy, but this appears to be as usual. Internally in very good condition. Rebacked, lower hinge weakened, front hinge professionally repaired. 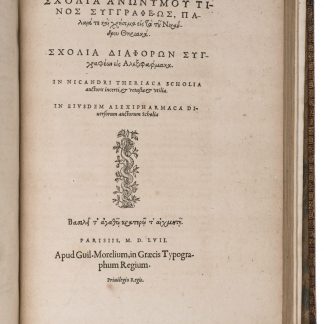