Small 8vo (100 x 148 mm). Calligraphic manuscript on vellum and paper. 112 ff. with various blackletter scripts in black, silver and gold, all with a full borders of knotwork, interlaced and geometric designs. Prefatory calligraphic and micrographic leaves, incorporating hymns, prayers and Biblical texts, with 5 pages of intricate micrographic text. 2 blank but bordered leaves at the front and 5 at the end, monogrammed "IKR" at end of index. Contemporary green velvet over wooden boards with silver clasps.

A splendid calligraphic manuscript on vellum and paper created for the 28-year-old Juliana of Hesse-Darmstadt (1606-59), countess of East Frisia, later in the collection of Victoria, Princess Royal, the eldest daughter of Queen Victoria and Albert of Saxe-Coburg. The micrographic text includes the liturgical calendar for 1634, the Psalms in mirror writing, verses in a maze-like composition, and an orb-shaped device.

Johannes Kirchring, one of the greatest 17th-century calligraphers, had settled in Oldenburg as early as 1592; he is last recorded in 1630 living with his son and successor, the painter and calligrapher Johannes Kirchring the Younger. The Kirchrings were superb exponents of the calligraphic skills developed in Germany during the 16th century, stimulated rather than extinguished by the demands of type design for printed books. Their micrography probably drew on the rich Jewish tradition of Bible decoration that was especially strong in Germany. Although Lutherans were not forbidden religious images, they shared with Judaism a great concern about the dangers of idolatry as well as great scholarly respect for the written word. Elaborate calligraphy and intricate micrography in elegant combinations of gold, silver and black were a splendid yet appropriate way of honouring the Word of God.

Another Lutheran Psalter, handwritten by Johannes Kirchring the Elder, was sold at Sotheby’s in 1994 and subsequently commanded £151,250 at Christie's in 2010 (The Arcana Collection Sale II, lot 18) - the only example ever to have been offered at auction. Apart from this, only four specimens of Kirchring's craft are known to exist, all in public collections (Stockholm Royal Library; Oldenburg State Museum; Halle University Library; Lübeck Municipal Library). A hymnal likely penned by Kirchring the younger in 1637 is known to have been owned by the brothers Grimm.

Provenance: Dedicated by the artist to Princess Juliana of Hesse-Darmstadt, wife of Count Ulrich II of East Frisia. The 19th century front flyleaf bears the ink signature of Princess Victoria Adelaide Mary Louisa (1840-1901). Victoria, the eldest daughter of Queen Victoria and created Princess Royal in 1841, was German Empress and Queen of Prussia by marriage to German Emperor Frederick III and mother of German Emperor Wilhelm II. 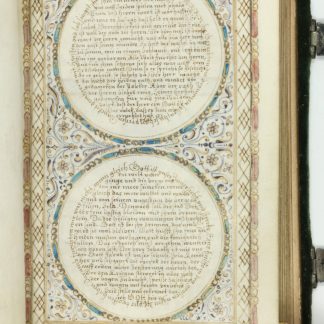