Folio (196 x 294 mm). (8), 90, (8) pp. Title within elaborate engraved border, engraved portrait of the author on verso of title-page. With 2 engraved illustrations and 8 folding engraved plates. With woodcut initials and head- and tailpieces. Modern vellum by Franz Ostermann (d. 1938) of Paris (with his ticket, dating to no later than 1902).

Giorgio Basta, Count of Huszt (1550-1607), an Italian general of Arbëreshë origin, was employed by Emperor Rudolf II to command the Habsburg forces in the Long War of 1591-1606. Later he was sent to administer Transylvania as an Imperial liege and to restore Catholicism as the dominant religion in the region.

"Basta's work bridges the gap between the forms of warfare evolved during the Dutch-French religious wars and those imposed on the Western world during the fights against the Ottomans" (Jähns).

Slightly browned throughout, some staining, otherwise in good condition. Provenance: from the collection of Thomas Fremantle, 3rd Baron Cottesloe (1862-1956), commander of the Territorial Army and president of the Society for Army History Research (bought from Davis & Orioli, November 1924). 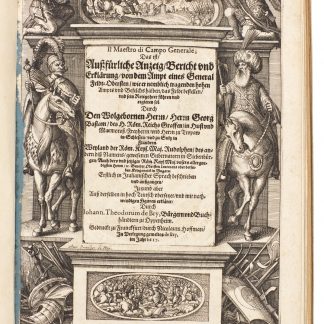