Burgess, James. On the Muhammadan Architecture of Bharoch, Cambay, Dholka, Champanir, and Mahmudabad in Gujarat.

First and only edition of this superbly illustrated description on the Muslim architecture of the more provincial towns of the state of Gujarat on the western coast of India. "Among the many varieties in the style of the Muhammadan architecture prevailing in different provinces of India, that which arose in Gujarât in the fourteenth and fifteenth centuries is one of the most instructive and deserving of study, as it is also the most beautiful" (preface). 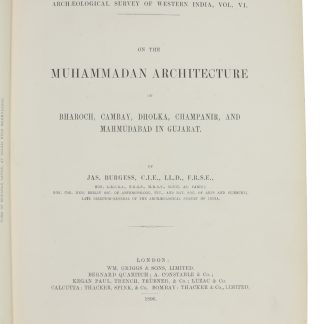