The Gallipoli Campaign, drawn in Cairo under the direction of T. E. Lawrence

The finest contemporary map of the Çanakkale sector of the Gallipoli Campaign, the site of the dreaded "Narrows" of the Dardanelles where Allied naval forces made their ill-fated attempt to "force the straits" towards taking Istanbul. Drafted in Cairo under the direction of T. E. Lawrence at the Arab Bureau's Intelligence Office, based on a recently captured Ottoman map.

In the early days of World War I, the Entente sought to knock the Ottoman Empire out of the conflict by taking Constantinople, by way of the Dardanelles. The Gallipoli Campaign (17 February 1915 to 9 January 1916) involved a force of 490,000 British, Indian, Australian, New Zealander and French troops making various landings upon the Gallipoli Peninsula that strategically guarded the mouth of the Dardanelles. The 325,000 Ottoman defenders, backed by German forces, successfully repelled these raids in what was one of the most bloody military contests in world history.

From the outset, the Allies were hampered by a lack of accurate maps of the Gallipoli Peninsula and the adjacent Asian shore of the Dardanelles. They eventually succeeded in capturing a complete six-part set of excellent, newly published Ottoman surveys showing the battle theatre in its entirety. These maps were rushed to the map department of the Intelligence Office (later the famed "Arab Bureau") in Cairo, where they were translated, enlarged and improved by a team headed by Lieutenant T. E. Lawrence, later known as "Lawrence of Arabia". These maps were printed by the Survey Department, Egypt, as a series of six interconnecting maps, although each map was designed to act as a stand-alone work complete in and of itself (a geographic key to all six maps is present on the verso of the present map).

Overall clean and bright, with some very light staining to upper-left quadrant and some light wear at some fold vertices. 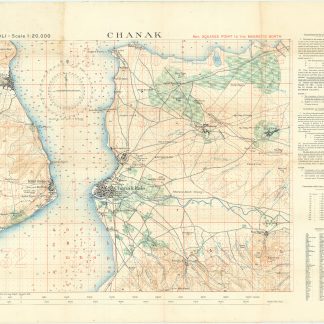