First official publication of the famous exchange of letters written between 1915 and 1916, between the Sharif of Mecca, Husayn bin Ali, and Sir Henry McMahon, British High Commissioner in Egypt, concerning the future political status of the lands under the Ottoman Empire. A special controversy concerned Palestine: Great Britain's pledged support for Arab independence in the region was not to be realized, and the correspondence went on to haunt Anglo-Arab relations for many decades thereafter. Unofficial excerpts from the letters had been circulated in the press as early as 1923; excerpts appeared in the 1937 Peel Commission Report, and the correspondence was unofficially published in George Antonius's 1938 book "The Arab Awakening". 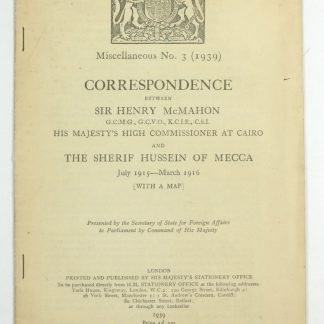