Only edition, printed in Arabic and German parallel text. Critical edition and translation of the famous 13th century ode "Al-Burda", a religious poem in praise of the Prophet Muhammad written by Busiri, produced by the Austrian orientalist von Rosenzweig (1791-1865). Translated into many European languages since the 18th century, starting with the 1761 Latin edtion, the "Al-Burda" saw several German translations, including a lyrical translation by another prominent orientalist, Joseph von Hammer-Purgstall, in 1822, none of which, however, were as successful as this edition. It launched Rosenzweig as an editor and translator whose extensive work culminated with his three-volume edition of Hafiz' "Diwan", published from 1858 to 1864.

Bound with the Al-Burda are extracts from Hammer-Purgstall's six-volume "Fundgruben des Orients", taken from vols. I and VI, including extracts from the Quran and from the works of Ibn Chaldun, as well as a catalogue of Arabic, Persian and Turkish books held by the Vienna Imperial Library.

Extremities lightly bumped; binding loosened. Paper continuously browned throughout; occasionally brownstained and waterstained. Pages 241-244 of volume VI transposed between pp. 260 and 261. Some handwritten marginal notes in ink and pencil near the end. The spine label does not correspond to the title of the main work, reading: "Freitag Dissertation de la Angueara". 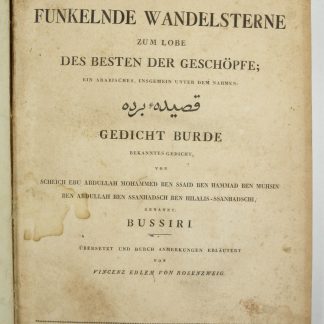