An intriguing specimen of British post-war intelligence documentation rarely seen in the trade, focussing on but not limited to the Middle East. Based on the Middle Eastern Intelligence services' zones of major responsibility and their spheres of interest (see the map in vol. 100), their reviews cover a vast range of topics. They not only outline the Anglo-Egyptian treaty negotiations and the political situation in Libya, Palestine, and Syria, but also discuss the Arab League (photograph of a meeting of the League in vol. 90), terrorist attacks carried out by Jewish illegal forces in Palestine, the struggle with illegal immigration (a photograph showing a boat of immigrants in vol. 74), and political Zionism. However, the reviews also cover the political and economic situation in Germany, the problem of former Nazi sympathisers regaining positions of power and security (sketched out in the case of "Dr. Drecksacker"), and include an eye-witness report by an SS man employed at the Auschwitz concentration camp, translated into English. British views on Russia make up another significant part, including the reprint of an article by the American journalist Brooks Atkinson, published in the U.S. magazine "Life", accusing Soviet leaders of "group paranoia", as well as analyses of Russian broadcasts with respect to Middle Eastern countries. Moreover, the reviews outline British relations with Greece and the Balkans, France, Yugoslavia, Bulgaria, Italy, Turkey and Kurdistan, Romania, and India, while also discussing the organisation and functions of the U.N.

Despite the imprint indicating a print run of 400 copies, none can be traced on WorldCat. A 12-volume set was sold at Christie's in 2018.

Wrappers have stamps of the "Assistant Director of Medical Service 3rd Divisions". Traces of rust near the staples. The first two pages of vol. 100 loose; a small tear on pp. 9f. of vol. 90, as well as a small flaw to the title-page of vol. 98, neither touching the text.

A rare window into the issues that concerned the British military intelligence following WWII. 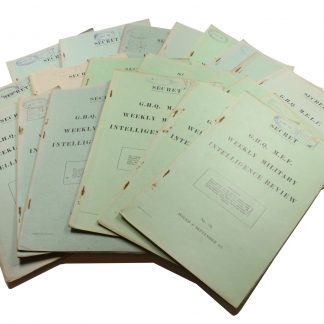