Rare first edition, "dedicated to the devotees and connoisseurs of oriental literature, by an assiduous student of the same, in Constantinople". One of Hammer's earliest works, written as a barely 30-year-old while serving as secretary to the Austrian delegation in Istanbul, this is the first German version of the bibliographical encyclopedia compiled by the Turkish scholar Katib Çelebi (1609-57), already used by Herbelot. Hammer amplifies this text from six additional manuscripts.

Katib Çelebi's introduction investigates the history, divisions, and estimation of science in the orient. This is followed by more than 300 sub-branches in seven general subjects: writing and calligraphy; language and history; propedeutics; speculative philosophy including natural and arcane science, medicine, and music (the most substantial class, comprising some 250 pp.); practical philosophy (ethics, political science); law and theology; as well as the inward sciences (ascetics). Each branch is headed by its original title printed in Breitkopf's Arabic typeface, often provided with extensive commentary (even discussing the various musical and astronomical instruments) and bibliography.

Bindings rubbed and bumped; spine sunned; interior somewhat browned and foxed as common. From the library of the Prussian chamberlain Rudolf von Stillfried-Rattonitz (1804-82) with his armorial bookplate "Ex Bibliotheca Stillfridiana" on the front pastedown. 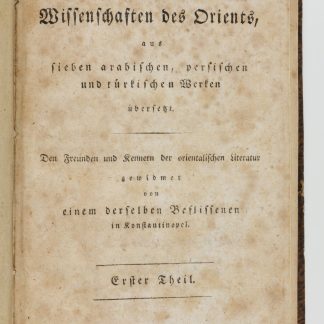