[Jerusalem]. Yehudah, A. L., and Abel Pann. Autograph letter signed and letter signed to the Committee of the Jews of the City of Jerusalem, in Hebrew.

Rare testimony of the first Jewish-Arab dispute over the Western Wall in 1920, the letter signed by A. L. Yehudah of the Hebrew Palestine Exploration Fund requests additional security at the Wall to prevent the Arabs from continuing their repair works following a government decree. The Jews, while agreeing that the works were necessary, appealed to the British that they be made under supervision of the newly formed Department of Antiquities, because the Wall was an ancient relic. On headed stationery (17 May 1920).

Autograph letter signed by the Israeli artist Abel Pann, undertaking to employ Kurt Meier as a lithographer in the Bezalel University College of Art (12 June 1924). 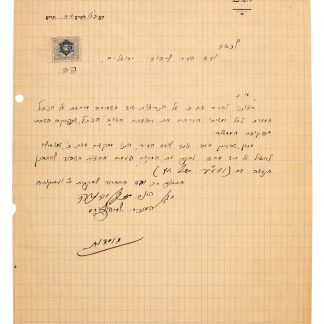