Scarce Portuguese account of the Third Battle of the Dardanelles in the Sixth Ottoman-Venetian War, the heaviest defeat the Ottomans had suffered since the Battle of Lepanto. Since 1645, Venice and the Ottoman Empire had been at war over the possession of the island of Crete. Ottoman forces had captured most of the island in the early years of the war, but were unable to seize its capital, the heavily fortified city of Candia (modern Iraklio). The Venetians had endeavoured to cut off the Ottoman army's supplies and reinforcements, and attempted several times to blockade the Straits of the Dardanelles, through which the Ottoman fleet had to sail to reach the Aegean from its base around Constantinople. In the morning of 26 June 1656 the wind was from the north, and the Ottomans made good progress, the Venetian galleys being unable to assist their sailing ships. Then the wind backed, trapping the Ottomans against the Asian side of the strait just below the Narrows, and a mêlée ensued. Kenan Pasha got back past the Narrows with 14 galleys but the rest were either captured, sunk or burned. 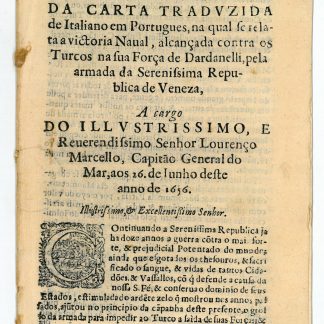