4to. 8 pp. With woodcut title vignette. Printed sheet folded into a pamphlet, unsewn and unbound.

Rare Portuguese account of one of several unsuccessful 18th century attempts by Muslim forces to recapture Oran. This operation took place in March and April of 1759, nearly three decades after the Spanish conquest of the city in 1732. Oran was repeatedly attacked by Algerian and Ottoman forces, but remained under Spanish rule until 1792. The report concludes with a table showing the numbers of cannonballs, shells and bullets fired in the battle. 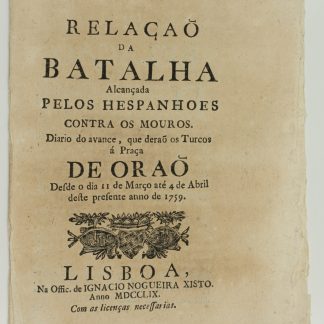