Very rare Portuguese account of one of several unsuccessful 18th century attempts by Muslim forces to recapture Oran. Translated by Manuel Pedro Tomás Pinheiro e Aragão (1773-1838), describing the events of May and June 1791. From 1790 to 1792, Muslim forces, led by Mohamed El-Kebir (d. 1796), besieged Oran and Mers el-Kebir, which were in Spanish hands since 1732. Both cities would be returned to the Ottoman Empire after a massively destructive earthquake in 1792. 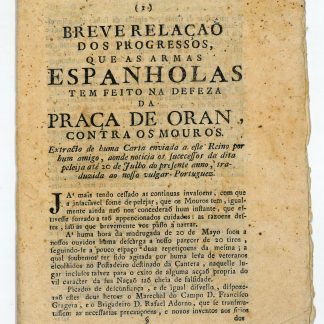