Volume 1 contains a long preface on the history of the oriental types of the Imprimerie Royale that were cast for the diplomat and orientalist François Savary de Brèves (1560-1628). Acquired by Richelieu for the Imprimerie, the valuable types were almost destroyed in the 18th century and saved by Joseph de Guignes, who wrote the preface. The volume also contains Guignes's comments on Al-Masudi's "Kitab Muruj al-Dhahab wa-Ma‘adin al-Jawhar" and Ibn-al-Athîr's "Al-Tarikh al-bahir fi al-Dawlah al-Atabakiyah bi-al-Mawsil" and two essays on Arabic manuscripts by Silvestre de Sacy.

The final volume focuses primarily on documents relating to the trial of Jeanne d'Arc, with several articles written by François de l’Alverdy. To this volume Guignes contributed a commentary on a 15th century Arabic manuscript recommending pilgrimages to the Al-Aqsa Mosque in Jerusalem, and another on a manuscript entitled "On the prerogatives of the Al-Aqsa Mosque" by Ibn Abul Sherif.

The collection was inceived under the auspices of King Louis XVI and the Baron de Breteuil. By 1965 it grew to encompass 43 volumes, but only the three volumes at hand were published under the original title by the Académie Royale des Inscriptions & Belles-Lettres. The printing of a 4th volume had already begun in 1791 when it was interrupted by the French Revolution, which also led to the suppression of the Academy in 1793. 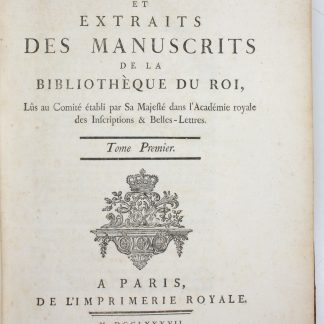