"All is well with respect to General Bonaparte"

[Napoleon Bonaparte - Exile in St Helena]. Naval Regulations at St Helena during Bonaparte‘s residence there with a sketch of him taken from life. (Regulations for guarding Bonaparte).

8vo. (29) pp., 15 blank pp. (3 of which interleaving the text). English manuscript on paper. With a pencil sketch of Napoleon mounted to first page and two small watercolour flags in the text. Original wrappers with handwritten cover-title. In slightly later full cloth box with giltstamped title to cover and spine.

Strict regulations drawn up by Rear Admiral Robert Plampin (1762-1834), commander at the Cape of Good Hope Station during the period when Napoleon Bonaparte was imprisoned on Saint Helena, likely commissioned by Admiral Pulteney Malcolm (1768-1838), Commander-in-Chief at Saint Helena Station, with the objective of enforcing a rigid blockade around the island, rendering any attempt to liberate the prisoner impossible.

The booklet consists of 28 articles directed at officers of the Royal Navy, charging each ship near the island with staying alert and ready to act, suggesting that the British officials expected a flight attempt at any moment. Apart from sleeping ashore, keeping boats moored at the shore, sailing from the island past sunset, employing any ships of the East India Company without permission from the commander-in-chief, or buying fish in open water, it was forbidden to communicate with anybody detained in Longwood House: "No Officer of whatever Rank belonging to His Majesty‘s Naval Service is to visit Longwood or the premises belonging thereto, or to hold communication of any sort by writing or otherwise upon any subject whatsoever with any of the Foreign Personages detained on this Island" (art. 3). As nighttime was considered particularly risky, a patrol boat was installed and instructed to go on patrol three times a night, paying special attention to the shoreline and any suspicious activity encountered there: "During the Night an Armed Boat provided Blue lights or False fires, and commanded by a commissioned officer, in possession of the Sea Parole is to row three times when the weather will permit of it, between Butter Milk Point and Lemon Valley seizing all Boats which may be discovered upon the waters, excerpting only those at the regular line of moorings [...] and those having the sea paroles, the latter of which however, the Officer of the Guard must distinctly understand he is not to suffer to pass until he shall have examined them in the most strict manner as to the service they are employed upon, and satisfied himself that no improper persons are in them [...] and in case he should perceive a Musket (or Muskets) fired from the shore he is instantly to pull towards the spot, to interrupt or chase any Boat or Person that may be attempting to escape" (art. 10).

The rules give evidence of general suspicion directed at all vessels, not excluding fishing boats staying near Saint Helena after sunset: "A Lieutenant of the Flag ship is to be appointed to the constant duty of seeing all the Fishing Boats get properly moored and secured at the anchorage in James‘ Valley every evening at sunset [...] and in case he should [...] discover any of the Fishing Boats are missing, or in short any circumstance of importance, he is immediately to repair to the commander in Chief with a report thereof" (art. 19).

In addition, the booklet includes regulations for the hospitalization of sick men on the island, the order of provisions, and bringing cattle and food to the island, as well as for the officers‘ attire, stating that the commander-in-chief "has no objection to round Hats provided they have Gold Loops and Cockades".

The pencil sketch shows a dismayed-looking Napoleon in profile, wearing his uniform and signature bicorne hat. Autograph note by J. Clark, likely a guard stationed in Deadwood, mounted to first page. It bears the first of six possible wordings that were used to inform the governor of Napoleon's circumstances, ranging from "All is well with respect to General Bonaparte" (seen here, dated 27 November 1818) to "General Bonaparte is missing". 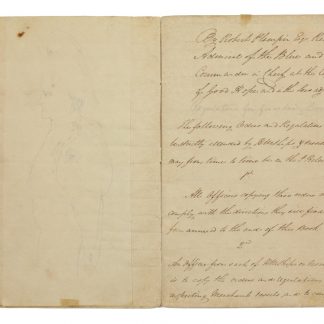