First edition of this grammatical treatise of Arabic known as the "Tasrif al-Zanjani", not printed again until 1817 (in Istanbul): the final work to leave Raimondi's famous Medicea press, and the only one produced there after a hiatus of 15 years. The long hibernation phase into which the Medicea entered after printing her last book in 1595 for Pope Clement VIII was probably due to the poor reception the printed Arabic books met with in the Orient. It was only with Paul V, elected Pope in 1605, that once more funds were released for the printing of Arabic works in Rome: now, the focus was to be on aids for the study of oriental languages, such as grammars and dictionaries. When Raimondi therefore published the "Liber Tasriphi", dedicated to the Pope for his generosity, he accompanied the text, handily arranged into paragraphs, with a literal and an exegetical Latin translation, sometimes with commentary. "The large corps used (30 point), combined with vocalisation and Latin text, makes for very spaciously set up pages. The Arabic title is a clever engraving in ta'liq script [...] With Raimondi's death in 1614 the Medicean Press was left slowly to die. A considerable number of punches was taken over by the Propaganda Press, which was set up in 1626" (Smitskamp).

Dedication copy for Pope Paul V with his large Papal arms stamped in gilt on both covers (a little chipped on the lower cover). The lower pastedown bears the engraved bookplate of the Borghese Princes ("Ex libris M. A. Principis Burghesii") with their coat of arms. Among the later owners was Napoleon's sister Pauline Bonaparte, who in 1803 married Camillo Borghese (1775-1832), son of Marcantonio Borghese III (1730-1800).

Some occasional browning throughout due to paper stock. Usually encountered only in poor condition, this is a wide-margined copy on strong paper, splendidly bound for the dedicatee, whose munificence made the printing of the book possible. 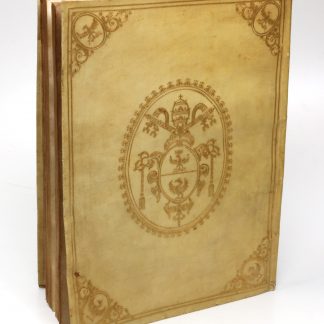