13 original drawings in various techniques: pencil, watercolour, gouache, and ink on paper. Mostly captioned in German (and a few in Italian), mounted on 12 leaves of coloured paper bound in an album. Contemporary red morocco, both covers plated with relief-stamped luxury cream paper, splendidly ornamented with the arms of the British monarchy and the City of London, bordered with gilt floral dentelle; central compartments calligraphed in red and gilt: "Louise" / "30. Mai 1857". White moirée endpapers. All edges gilt.

A splendid album of ethnographic portraits, possibly intended as templates for the nine-year-old Princess Louise, Duchess of Argyll (1848-1939), the sixth daughter of Queen Victoria and Prince Albert of Saxe-Coburg and Gotha, and like her mother a highly accomplished artist at an early age. The meticulous and detailed drawings show representatives of various peoples of the world, some in half-length and others in full figure, mostly captioned in a German hand: three Australian Aborigines ("Neuholländer", "Vandiemens-Länder" [from Tasmania], "Aramanga" [from Queensland]), two native Americans from North America ("Nordamerikaner", "Eingeborener vom Oregon"), a Filipina, a Hawaiian, an Indian Brahmin, two orientals (a tea-seller and a scribe), a female African slave, a mongolian ("Sifan"), and another, unidentified Asian. All pictures would appear to be copied from 19th century travel publications; three are obviously based on plates from James Cowles Prichard's "The Natural History of Man" (London 1843).

Album's corners lightly bumped; paper and paints clean and crisp throughout. Other early drawing and scrapbook albums compiled for or by Princess Louise are kept in the Royal Collection. 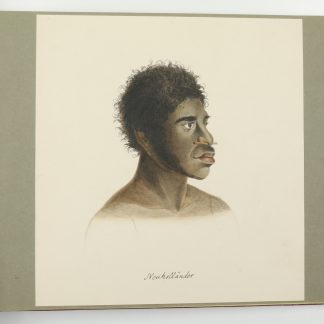