Napoleon's memoirs of his French campaign

First and only edition of Napoleon's memoirs of his French campaign in Egypt and Syria as dictated to his general and grand maréchal du palais, Henri-Gatien Bertrand (1773-1844), during his exile in St. Helena (1815-21). Bertrand was the only one of Napoleon's loyal companions in exile to have participated in the Egyptian campaign, which explains his choice of subject.

The two volumes of text present an ample, if subjective account of the famous military campaigns, enriched with transcripts of numerous official documents and letters relating to the events described. The beautiful atlas, engraved by Alexandre Moisy (1763-1827), presents 18 partly hand-coloured maps that are mostly in direct connection with the campaign. Including a general map of the south-eastern Mediterranean and the Red Sea, a map of the Mediterranean with the movements of the French and British fleets, a map of Egypt, a map of Syria and the Middle East, maps of the invasion of Malta, the Battle of the Nile, the Battle of the Pyramids, the Siege of Acre (with an engraved veduta of the city), the Battle of Mount Tabor, and the Battle of Aboukir. Four maps of parts of Italy, Switzerland and the Netherlands represent additional theatres of the War of the Second Coalition in 1799.

Bertrand's "Guerre d'Orient" was published 26 years after Napoleon's death in exile and three years after Bertrand's own passing, on the initiative of his son, general Henri-Alexandre-Arthur Bertrand, who gifted the copy at hand to its first owner, as indicated by the morocco cover label on the atlas.

Lower right corner of the atlas slightly bumped, occasional minor foxing and browning in all volumes. Atlas with several minor tears (not affecting the maps) and occasional marks and scribbles in ink, ballpoint, and crayon. 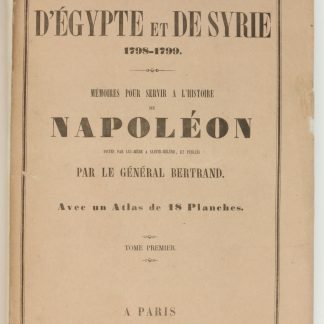