"Fair is foul, and foul is fair": The first Arabic "Macbeth", translated from Shakespeare

First Arabic edition thus of Shakespeare's play "Macbeth", and the first to be based on the original Shakespearean text. A previous translation by 'Abd al-Malik Iskandar and Jirjis 'abd al-Malik, supposedly produced in 1900, is lost. Another Arabic translation, by Khalil Muthrani, was published also in 1911, but it was based on the French version rather than the English text. A translation in Ottoman Turkish, by Abdullah Cevdet (Karlidag), had appeared in Cairo as early as 1909.

Interestingly, the present translation, in verse, was staged before appearing in book form: in early 20th century Egypt, foreign plays appealed foremost to theatregoers rather than to readers. The appearance of the dramatic text in print, therefore, implied not so much a broadening of cultural interests among intellectuals as a commercial stage success on which the publisher was eager to cash in.

Muhammad 'Iffat provides a verse dedication that reads: "Our Arabisation is dedicated to the whole world; to every writer, poet or scholar", adding a special dedication to the "virtuous scholar" (al-'alim al-Fadil) Tabuz Zada Husayn Rushdi Pasha, then Foreign Minister of Egypt. 'Iffat describes himself as "the son of Khalil Pasha 'Iffat'". Muhammad 'Iffat, who has already translated "The Tempest" (1909), was an Arabic judge in civil courts and a correspondent of Christiaan Snouck Hurgronje (1857-1936).

Wants title-page; the text is complete with index and colophon. Marginal chippings to a few pages, not affecting the text. Minor stains and flaws to several leaves; a small stain to the lower corner throughout the last forty pages. Overall a good copy. Very rare; OCLC lists a single holding library (Yale). 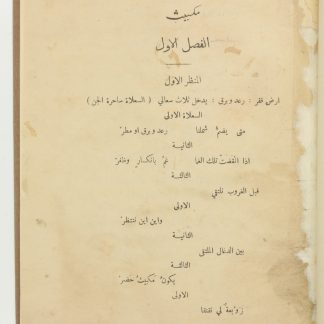