Archeaological sites in the Middle East, with 143 reproductions of photographs

First and only edition of this bilingual work with 143 photographs of Middle-Eastern archeology, compiled by the well-known German archaeologist Theodor Wiegand (1864-1936). The publication was commissioned by Ahmed Djemal Pasha (Jamal Basha, 1872-22), the Ottoman military leader and Minister of the Navy, who also wrote the foreword. The plates show archaeological excavation sites in Aleppo, Amman, Baalbek, Damascus, Gerasa, Jerusalem, Palmyra, Petra, and other places. Each plate is accompanied by a separate leaf explaining the photographs, with the text in both Arabic and German. Some of the photographs are by the Swedish photographer Lewis Larsson (1881-1958), others were taken during the expedition by Otto Puchstein (1856-1911) to the capital of the ancient Hittite Empire, Hattusa, in present-day Turkey. 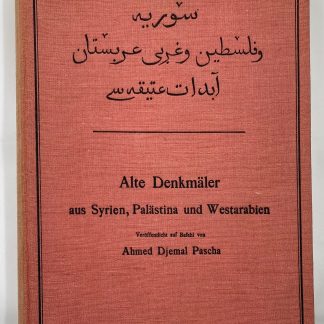