Folio (220 x 355 mm). German manuscript on paper. A sheaf of court documents containing records and correspondence (some as drafts or copies). 30 pp., folio und 4to, thread-stitched in grey wrappers with handwritten cover title as quoted above.

Uncommon example of early modern court records relating to a case of sexual assault in the principality of Schwarzburg-Rudolstadt (now Thuringia). During the night of Sunday, 14 January 1821, the 19-year-old maidservant Johanna Christiane Pröschold from Piesau was brutally raped at Pfeiffer's inn in Ascherbach (now part of Lichte near Neuhaus am Rennweg) by Friedrich Scherf, Adolph Brödel, Markus Glaser, Christoph and Wilhelm Wächter, as well as Carl Kampf from Lichte. The documents include the records of the statements made by the maid as well as by the perpetrators, signed by the local sheriff Johann Christoph Horn; a certificate of good character for Pröschold's employer, the innkeeper, given by the priest Johann Jakob Korn; the copy of a letter to the Administrative Office in Schwarzburg; and the draft of a report to the general counsel, König, in which it is said that the maid "suffered through this most villainous, shameful behaviour the most horrible maltreatment, indeed insulting to humanity, which in fact endangers her very life". The culprits were sentenced to corporal punishments and prison terms of various severity, spent at the Schwarzburg gaol.

A few leaves loose; a few insignificant edge flaws, but on the whole in excellent state of preservation. 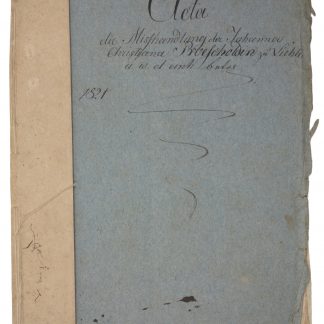