[Freud, Sigmund]. A collection of 82 works from the library of Sigmund Freud.

76 volumes, mostly offprints or articles removed from journals, bound in private wrappers or in the original printed wrappers. Mostly 8vo but including a few specimens in small folio.

An ensemble of 82 works from the library of Sigmund Freud, comprising roughly half of the known corpus now in private hands. In his census, the medical historian Gerhard Fichtner established the number of works from Freud's former library now in private ownership at only 166 works, or some 4 percent of his former collection of 3725 titles, the vast majority of which (more than 3,400 books) are today preserved by the Freud Museum in London and the Health Sciences Library in New York. Regarding the privately owned works, "it is noteworthy that Freud (during both the Viennese and London time) bestowed upon Eva Rosenfeld, a friend of Anna Freud, 25 important early items from his library. Amongst the privately owned volumes are also some that surfaced in recent years in the second-hand market. They are predominantly offprints, whose dedications show they once belonged to Freud's library and, as a rule, carry the partially erased stamp of the Psychoanalytic Ambulatorium Vienna. They must have arrived long before Freud's emigration in this library, which was seized and destroyed by the Nazis. Did the erasure of the stamp help to save these items, or did it disguise unauthorized possession? They come from the estate of a German analyst" (Davies/Fichtner, pp. 17f.). Indeed, the nature of some of these erasures - rather constituting overpastings with near-contemporary typed transcriptions of those parts of the text obscured by the stamp (as in David Baumgart's article on Spinoza's image in German and Jewish thought) - would strongly suggest the former reason: such an overpasting would arguably have sufficed to conceal the items' provenance from a cursory examination in 1938, but would not at all be helpful to a collector wishing to obscure a third party's title. 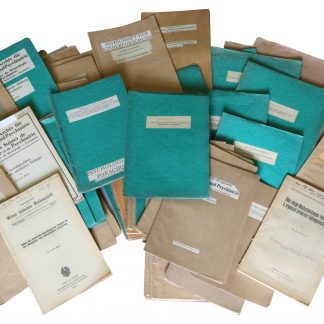