4to. XVI, 120, 330 pp. Near-contemporary library binding by the Lund "Semitiska Seminariet": half calf over marbled boards with giltstamped spine-title. Bound with the original printed wrappers.

Important critical edition of a 14th century Arabic manuscript held at the Königliche Hof- und Staatsbibliothek in Munich, the "Cod[ex] arab[icus] Quatremère 37", produced by the Swedish orientalist Zetterstéen in Arabic type. The edited text is preceded by a German foreword and a philological introduction by the editor. The Codex Quatremère 37 contains a compilation of two chronicles of the Mamluk Sultanate, the first anonymous, the second by Badr al-Din Baktash al-Fakhiri (d. 1334). The first part begins with the Mamluk conquest of Acre, wrested fromj the Crusaders in 1291, and ends with the beginning of the third reign of Sultan An-Nasir Muhamad, who returned to Egypt from Al Kark in 1309; the second part picks up at the Sultan's return and describes events up to his death in 1341. The German orientalist Gustav Weil considered the manuscript to be part of a larger series, as there is a reference of a subsequent 8th volume of the chronicle at the end of the codex.

Pink label on the inside of the front wrapper, indicating that the book was presented by the author ("Ueberreicht vom Verfasser").

Contemporary ownership to front wrapper. Stamp of the Lund Semitiska Seminariet to front pastedown and to verso of title-page; their bookplate overpasted by that of the Lund University Library. Later in the collection of the Swedish numismatist Bengt E. Hovén (his handwritten ownership, dated 23 Sept. 2014), to flyleaf. Extremities very slightly rubbed; interior crisp and clean. Never seen at auction. 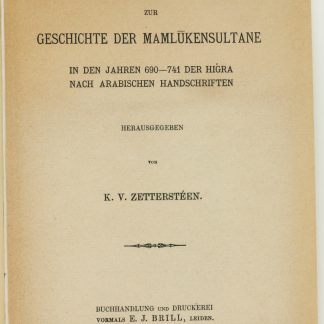