A very rare example of a signed Lenin portrait. Dated in his own hand "26/V 1920" and signed in French as "Vladimir Oulianoff". Additional signature of the photographer, Moses Solomonovitch Nappelbaum (1869-1958), in pencil in the lower right corner of the cardboard matte. Nappelbaum shot the famous portrait at the Smolny Institute in St Petersburg in 1918. The present print shows typical graphic retouching by the artist to the background and lapel areas.

By tradition, this photograph was presented by Lenin to the English socialist politician George Lansbury (1859-1940), who had visited the Soviet Union in early 1920 and hat met the leader of the Revolution in Moscow on 22 February. Later that same year, Lansbury published a widely received account of his journey, "What I Saw in Russia", in which he gave a highly flattering portrayal of Lenin.

Occasional insignificant scuffs; dark areas show some silver mirroring due to the oxidative-reductive process. Nappelbaum's signature is rather faded, while that of Lenin remains stark and well-defined. 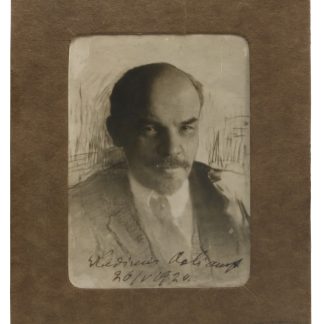