First Russian edition of Marx's "Manifest an die arbeitende Klasse Europas", the founding document of the First International. This was Marx's inaugural address delivered at the 1864 foundation of the International Workingmen's Association in St. Martin's Hall, London, calling upon the workers of the world to unite. The workers' movement's principal means of agitation, the address was first published as a brochure in London on 24 November 1864, soon circulating in several European countries as well as in the United States. The present edition is the first Russian translation of the speech, predating the first printing on Russian territory by three years (St Petersburg, Izd. "proletarij", 1906). 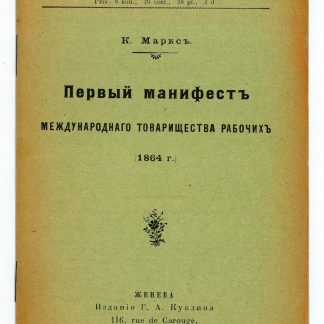